A general problem in all climate/storage and maturing rooms

Temperature and humidity in climate rooms are familiar challenges that lead to mould growth. The mould is first found in the air and then products are contaminated via the mould in the air.
Therefore, it is crucial to have control of the temperature and humidity in storage and maturing rooms, as products such as hams, salami and mature cheeses and dry-aged beef must be able to endure the long maturing and ageing process until they have reached the correct consistency and PH level, and this process results in significant weight loss, which is primarily fluid and moisture.

Pers Kjøkken AS in Sandefjord, Norway, was among the first to have ionisation installed to remedy mould in maturing rooms almost 20 years ago. The company is known for producing hams, salami and Pinnekjøtt (lamb ribs) of the highest quality, and therefore, it has always been important for the company to be able to produce under the best conditions. The ionisation equipment is from 2002 and therefore about to become obsolete. There have also been ongoing renovations and expansions in the climate room so that the ionisation equipment is due for an upgrade.

The challenges that Pers Kjøkken AS has had with mould are, as mentioned, initially quite common in climate rooms/maturing rooms. Unfortunately, the conditions that make the maturing room optimal for the specialised products are also the conditions that are good for mould in the air. Therefore, there was also no doubt that the ionisation had to be renewed and customised to the new environment, for which the equipment from 2002 was no longer fit for purpose. Over the years, we at FHS Scandinavia have built up extensive expertise in dealing with mould in maturing rooms, and our ionisation supplier, Airgenic, has developed more efficient ionisation pipes and equipment.

A “no cure no pay” solution was offered to Pers Kjøkken AS at the original installation 20 years ago, and the same solution was offered for the new installation. We offer this to all companies with similar challenges in maturing rooms because it is a known problem for which we have a solution. The result is less waste and off-cuts and less cleaning to remove mould and yeast. 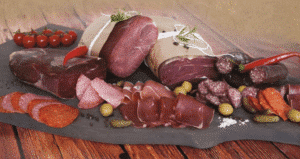 DO YOU HAVE A CHALLENGE?

Do you need help with your challenge? Fill out the form and we will contact you as soon as possible